A Story and Sequence pack featuring three stories: An Adventurous Appetite (F/FFF) Naga Pred Brandy, a very large naga takes on a job to clear a tower from three elves who have made life difficult to a group of archeologists.  A Centauress Savoiour (FMMM) Centaur pred Jezebel, Queen of the Centaurs discovers a trio of men hunting a beautiful elf, when she learns that the elf is nobility she makes the hunters her prey.  The Lady shows Her Fangs (F/FF) Werewolf Pred Irene Fenrere is a kind and caring noblewoman whos reputation is tarnished after standing up for a young man. After discovering the culprit of her reputation loss, she makes sure they never do it again.   And Three sequences:  The Dangers of Mermaid Cove (F/M) Mermaid Pred, shows why pirates try to avoid mermaid cove, after all there is a fearsome predator that lurks under the water.  A Widening witch portrays a witch who has recently had guests for dinner. Though by morning she might be too wide to enter her house.  And a 23 panel, 4 Page sequence complete with speech text,  A Stuffed Sphinx (F/MMFF) Sphinx Pred, follows Estelle, a sphinx living in modern times as she deals with a small group of very rude treasure hunters. 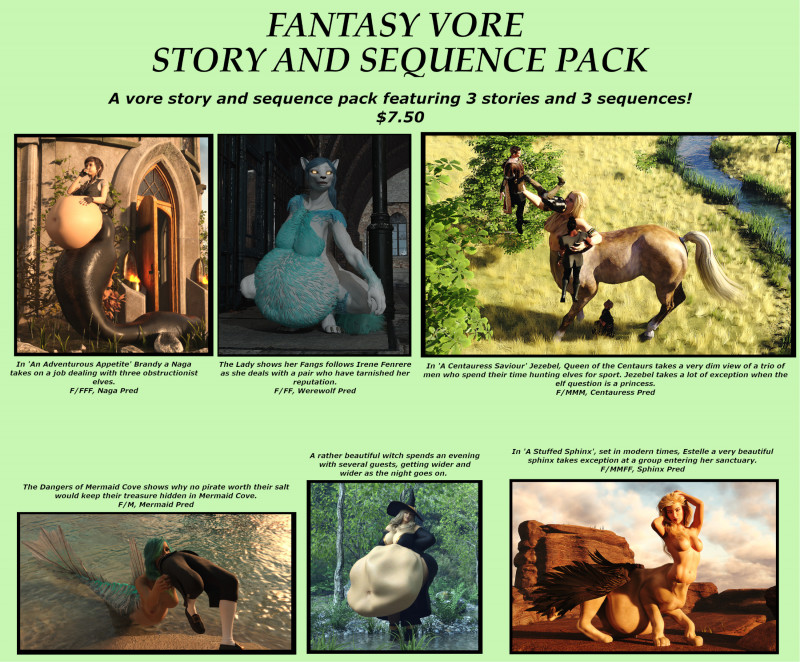